Last fall, as Covid variants continued to threaten, my wanderlust took me to Europe twice in five weeks. My September trip to Paris and a 13-day small boat cruise on the Rhone River through Provence quickly gave way to an October 18-day sea voyage on a ship along the Iberian Peninsula around Gibraltar with a stop at North Africa ending my 2 year hiatus from international travel.

Both trips had been planned for at least a year and all this past summer I kept checking travel restrictions to make sure that finally, finally, I was packing my bags again. Sister companies Overseas Adventure Travel and Grand Circle Travel have never let me down. From adventures to four Southeast Asian countries, a 3-week trip to northern India during the colorful Holi festival, and an exploration of South America/Galapagos to more “smooth” trips to Sicily, the Middle East and Eastern Europe, these companies always deliver.

My trip to France took me from a bull ranch where the bull is king to an American cemetery where WWII soldiers are buried to discover little-known architectural treasures in Paris in the south of France and the Mediterranean.

Pre-trip PCR testing and requirements to wear masks on all flights were standard as my friend Lynda from St. Augustine and I went to Paris to join our group of 16 to 13 days cruising through the land of vineyards, lavender fields, castles and historic villages. Although our Chanson boat was a maximum of 70, she was booked at half capacity in deference to Covid. On board were two travel groups of 16, each with their own travel guides who guided us to amazing places and discoveries not often visited by the average American.

Paris was busy. A tour of Notre Dame Cathedral was bittersweet as scaffolding towers, tall building fences and redirected traffic reminded us of that ancient treasure and the tragic fire on April 15, 2019. It will be years, decades before it reopens to the public.

Instead, we visited one of my favorite places – Sainte-Chappelle – a Gothic church within the walls of the Palace of Justice complex. Built in the 13th century, the three-level church features two floors of stained glass windows held in place by narrow Gothic stone supports. Depending on the time of day, rainbows of light bathe the floor and walls. The cobalt blue Gothic ceiling is painted with thousands of golden stars. Little visited by American tourists who opt for more popular sites like the Eiffel Tower, the Louvre and the now closed Notre Dame, it was breathtaking.

The Romance of Provence

Our river trip on the River Rhône began two days after arriving in Paris, embarking from Lyon, known for its silk industry during the Renaissance and an important location during the Second World War. Along the narrow streets we entered the shop of a silk weaver who still makes church clothes and other silk items by hand; is becoming a rare trade.

A trip to a local market one morning was a feast for the eyes and the stomach. It spanned blocks and offered a colorful assortment of fresh local fruits, vegetables, nuts, pastries, breads, meats and fish. We just wished we lived there and could cook our own gourmet meals. A young Asian violinist played classical music as people passed.

We sail at night towards Vienne, home to ancient Gallo-Roman ruins: a Roman temple and an open-air theater with stone seats from the time of Roman rule. In Vienne, we were treated to a home visit to get to know better how the locals live. This is a traditional feature of travel with Overseas Adventure Travel and Grand Circle, and it’s always a treat. Our travel leaders take us to families who have agreed to provide coffee and dessert or lunch. So we are alone, communicating in each other’s language as best we can. At the end of the visit, we made new friends.

The food on board was amazing and included a full breakfast as well as lunch and dinner with elegant French-inspired desserts. Evening onboard entertainment encouraged guests to spend time getting to know each other.

Next stop: Viviers, called the Gateway to Provencewhere we learn about the Chauvet Caves by visiting an exact underground replica of the ancient Paleolithic caves that until 1994 hid some of the best preserved figurative paintings in the world of horses, lions, bulls and advanced drawings of musical instruments and other tools used by this early civilization.

A late afternoon and evening sail down the river to Avignon, the heart of Provence, took us to the “City of Popes”, where during the 14th century it became the center of the papacy as the situation in Rome was changing.

In the morning we visit the Palace of the Popes and then head to the Pont du Gard Aqueduct, built by the Romans in the first century to transport water from underground springs to serve the region. Over six-tenths of a mile long, the three-tiered structure towers over a nearly dry riverbed 160 feet below the upper level. It is the tallest Roman aqueduct in the world and one of the best preserved.

As we began the final leg of our river cruise, Arles was waiting for us. Famous as the town of Vincent Van Gogh, it is where he painted most of his masterpieces, depicting scenes of the local population and the countryside. We pass familiar scenes, inspirations for paintings like “Starry Night”, “Arles Hospital” and “Café Terrace at Night”, marked with interpretive plaques to help hark back more than 100 years to its heyday. Although some of his 860 oil paintings are among the most prized of the Post-Impressionists, he died penniless two days after killing himself with a revolver at age 37. 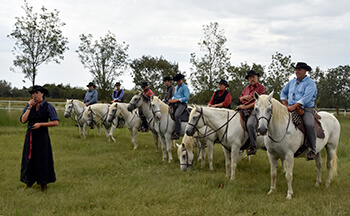 A salute on horseback from a multi-generational bull farm.

A visit to a multigenerational family’s ranch where award-winning bulls are raised. As we climbed, nearly a dozen “cowboys” and “cowgirls” greeted us, mounted on beautiful white Camargue horses. From the back of a farm truck’s trailer, we followed the guardians as they rounded up their day’s bulls in the pastures. The family shared with us French bull-breeding traditions before heading back to the Chanson for the captain’s farewell dinner.

Near the end, discoveries continue

Leaving our boat behind the next morning, we head through the southern part of Provence towards the coastal city of Nice, stopping at the Rhone American Cemetery to pay tribute to the 858 Americans buried there who lost their lives during the Allied invasion of southern France in 1944. .in World War II. Veterans on our trip laid a wreath at the memorial.

Our final stop, a few days on the French Riviera in Nice, included time to walk along the city’s seaside promenade, stroll through the extensive gardens and parks, spend time at the city’s large open-air market in Nice’s Old Town, and begin to say goodbye to our fellow travelers.

Lynda and I both tested negative on the required covid PCR tests before returning home, so we were on our way with no problems. We brought back memories of new friendships, lots of photos and a few extra pounds of delicious French wines and cuisine. Nothing to complain about as the early adopters of overseas travel last fall.

To be continued: Next month, senior writer Pam Keene shares her trip to the Iberian Peninsula from Lisbon, Portugal, to Barcelona, ​​Spain.

Photos: by Pamela A. Keene