By the looks of it, he’s a weak-willed, working-class man. A victim of routine and routinely disregarded – by his wife. Everyone thinks he’s a wimp. Everyone falls on him. And that’s it?

This very deceptive setup is the brainchild of Bob Odenkirk, the main character in the very twisted series breaking Bad and Better call Saul. Its premise was developed by a screenwriter into an unusual screenplay Derek Kolstad, known for the rhapsodic violence John Wick movies. Her insane imaginations are spurted on to the screen in torrents of blood by a Russian-born, London-raised director Ilya Naishuller, who won a Toronto Film Festival People’s Choice Award for Best Midnight Madness Movie for his film hardcore henry. These are the filmmakers and this is their creed. Just so you know what you signed up for.

Bob Odenkirk as Hutch Mansell in Nobody, directed by Ilya Naishuller.

Hutch Mansell (Odenkirk) is a submissive family man hiding in the suburbs. His wife Becca (Connie Nielsen, wonder woman) carries his testicles in her Dooney & Bourke purse. They hardly speak. A pillow divides their bed when they sleep. Every morning she scolds him for not taking the garbage can to the garbage truck on time. She belittles him in front of her teenage son and daughter and is unmoved when he confronts her callousness with his deepest feelings and regrets: “We haven’t had sex in months. We haven’t made love in years.”

The clearest sign of his passivity are the nightly burglars who break into his house and one of them punches his son in the face. Hutch prevents further violence by letting her escape. Is a father who doesn’t fight for his family really a father? A lion? A real man?

Hutch may be crawling on the outside, but on the inside he’s a heartless killer. A former international assassin. a beast His decision not to fight the night of the home invasion haunts him. Now he wants to let off steam. He finds the brawl of his dreams on a public bus when he comes face to face with young Russian thugs who threaten a female passenger. When the confrontation is over, he leaves a trail of mutilated bodies. One of the victims is the young brother of an evil Russian crime boss named Yulian (Aleksey Serebryakov, Leviathan), who loves karaoke nights and sharkskin suits. The gangster and his henchmen are after Hutch and his family. It’s on!

Streaming fans who watched breaking Bad or Better call Saul know that Odenkirk can play the role of a dirty, sociopathic and pathological liar quite well. Here he goes about his business in cold blood as a killing machine on autopilot. Occasionally passion seeps through, but tears, happiness and overt anger are not in his DNA. He might look like a middle-aged guy who couldn’t beat up a sixth grader, but if he’s got his killer groove, damn it. Chases, bombings, stakes and broken jaws ensue.

(from left) A bus thug (Alain Moussi) and Hutch Mansell (Bob Odenkirk) in Nobody, directed by Ilya Naishuller.

Kolstad’s screenplay explores family values, elements of revenge, domestic espionage and financial inadequacies. The dialogue is juicy. Says Hutch as he’s about to kick ass, “I hope those asses – like hospital food.” The characters are three-dimensional in an action/crime/thriller that only needs two dimensions. The unpredictable plot keeps viewers guessing and keeps momentum for 92 minutes. His writing only falters when Hutch decides to share his bio/story with some bloodied assailants who are sitting on his couch and about to die. It is boring. Genre fans don’t need fancy explanations and elaborate backstories. Just throw the firepower at them and shut up.

Naishuller’s work has no wrinkles. His action scenes are balletic, graphic, and vicious in a very Chad Stahelski (John Wick) kind of way. Both directors have similar tastes in kicks, shots and punches and they respect these main attractions; much like Sam Peckinpah’s love of carnage in films like Stray dogs. It also helps that Naishuller cut his teeth out on music videos and commercials. He is keenly aware of the visual environment, the power of ego movement and provocative imagery.

Hutch Mansell (Bob Odenkirk, seated with his back to the camera), Albert (Neil Davison, fourth from left), Yulian Kuznetsov (Alexey Serebryakov, seventh from left) with members of the Russian mafia in Nobody, directed by Ilya Naishuller.

Finding the right writer and director helped actor and producer Bob Odenkirk get a monkey off his back. Once upon a time his house was robbed with this family inside and he didn’t confront the crooks. When the ordeal was over, a policeman fatefully said to him, “You did the right thing. It’s not what I would have done, but you did the right thing.” This questioning of his primal instincts as a family man lingered in Odenkirk’s mind long enough to pull this revenge film together and reinvent himself as the Charles Bronson of his impasse.

Connie Nielsen more than holds her own in what is truly a boys’ night out. Colin Salmon as an influencer called The Barber is pleasantly stylish. Araya Mengesha (Jean the Joneses) speaks fluent Russian as Yulian’s top henchman. With RZA (Kill Bill: Vol. 1) as his brother and Christopher Lloyd as his father, Odenkirk leads the film to a very cathartic finale. 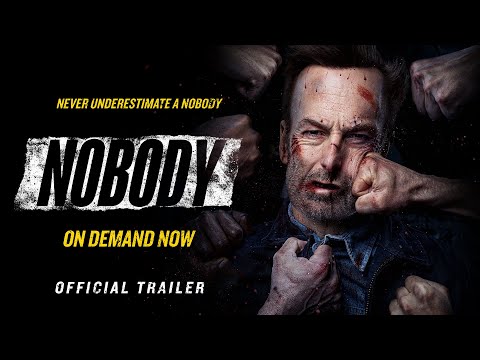 Don’t underestimate Odenkirk or his alter ego Hutch. Not like the young Russian thug on the bus when he said, “What are you still doing here, old man?” Said the goofy-looking geezer, interpreted by Odenkirk, “I’ll fuck you up!”

In cinemas now and eventually on DVD and streaming services.