That Detroit Red Wings and Colorado Avalanche forged one of the fiercest rivalries in professional sports in the late 1990’s and early 2000’s, bringing untold memories to fans of both sides as well as hockey fans around the world. Even if you weren’t a fan of either team, the games between these two once-historic rivals were certainly a must-watch on TV, whether they happened in the regular season or the Stanley Cup Playoffs.

Of course, everyone remembers March 26, 1997, affectionately known as “Fight Night at the Joe.” Forward Darren McCarty demanded revenge on Avs forward Claude Lemieuxbeat him to a pulp, while Lemieux infamously “cooed” in retaliation for the horrendous blow he landed. Kris Draper in the postseason of the previous year. Of course, that triggered a wild scuffle on the ice, which also included goalkeepers Patrick Roy and Mike Vernon’s notorious junk.

The two teams continued their battles on the ice that culminated just over 20 years ago with Detroit’s incredible 7-0 win in Game 7 of the 2002 Western Conference Finals, while pursuing Roy on his way to her 10th Stanley Cup -Victory. Six years later in 2008 there was a final postseason series between the two teams, featuring many of the old guard from both teams. It wasn’t a contest, however, as the Red Wings swept Colorado en route to their 11th Stanley Cup in franchise history from the postseason (the first win by either side in a playoff series).

Last month ESPN released its trailer for the E:60 documentary, which will debut this weekend, and now additional footage has been released of interviews with players on both sides, including Roy, Brendan Shanahan and Vernon.

The battles between the Avalanche and the Red Wings were intense 😳 @E60 investigated, resulting in the NHL’s fiercest rivalry 😤 📺 June 26 | 1 p.m. ET | ESPN https://t.co/z8e2UEkHYU 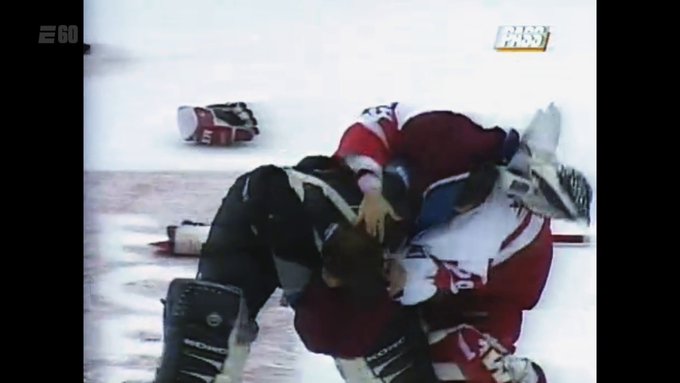 Have you subscribed to ours? Youtube channel still? Subscribe to and hit the notification bell to stay up to date with the latest sports news, rumours, interviews, live streams and more from Detroit!