Gov. Tom Wolf’s office said he would veto “any legislation that discriminates against LGBTQIA+ Pennsylvanians.”

Supporters of the legislation argue that transgender women have an unfair physical advantage by competing in women’s sports.

The GOP-controlled Pennsylvania Senate on Wednesday passed legislation that Republicans say will limit sexually explicit content and teaching about sexual orientation and gender identity in public schools, reflecting the partisan fighting that has taken place in state buildings throughout country to be held.

The bills passed almost along party lines, and Democrats warned Gov. Tom Wolf will veto it. They still need the approval of the House of Representatives.

A bill passed between 29-21 would ban teaching about gender identity and sexual orientation for pre-kindergarten through fifth grade students.

A second bill, passed 30-20, would require educators to identify sexually explicit content in curriculum, classroom materials and books. Educators would need to notify parents if a child’s coursework or a book they wish to borrow from a library contains explicit content, and parents could prevent their children from viewing the material. 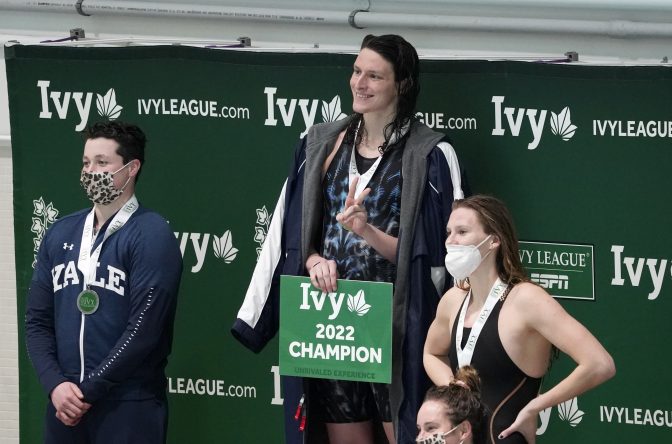 Pennsylvania’s Lia Thomas (center), Yale’s Iszak Henig (left) and Princeton’s Nikki Venema stand on the podium after a medal ceremony after Thomas won the 100-yard freestyle, Henig second and Venema third in the swimming and diving championships Ivy League Women at Harvard, Saturday, February 19, 2022, in Cambridge, Massachusetts. Henig, who is transitioning to a male but has not yet started hormone treatments, swims for the Yale women’s team and Thomas, who is transitioning to a female, swims for the Penn women’s team. (AP Photo/Mary Schwalm)

Wolf’s office said he will veto “any legislation that discriminates against LGBTQIA+ Pennsylvanians.”

A third bill that would ban transgender girls and women from playing in youth and collegiate sports in a manner appropriate to their gender was vetoed by the Democratic governor after the Senate passed it on Wednesday.

In recent months, bills such as gender identity and sexual orientation education have emerged in numerous states.

Florida drew statewide attention with a new law that prohibits educators from discussing sexual orientation or gender identity in elementary school or in a way that is not age or developmentally appropriate for students.

In May, North Carolina Senate Republicans put forward a similar proposal, wording it in much the same way as Pennsylvania Republicans: as legislation giving parents control over what their children are taught.

The Republican sponsors of the Pennsylvania bill say it is consistent with the state’s “timetable for beginning existing academic standards on general sex education in the sixth grade.”

Democrats slammed the bills during the contentious ground debate as further harm to an already marginalized population of LGBTQ students in schools.

“This is not Florida’s ‘Don’t Say Gay’ law,” said Sen. Lindsey Williams, D-Allegheny, during the debate. “It is worse.”

The law requires schools to notify parents of any changes to a student’s services and supervision unless it can be “reasonably demonstrated” that notifying the parents “would result in the abuse or abandonment of a minor.”

With parental or guardian permission, school staff may assist a student who has “initiated communication” with educators about sexual orientation or gender identity.

The bill would also allow parents to sue school districts for breaking the law.

One sponsor, Sen. Ryan Aument, R-Lancaster, said the bill empowers parents to initiate conversations of a sensitive nature, rather than teachers. 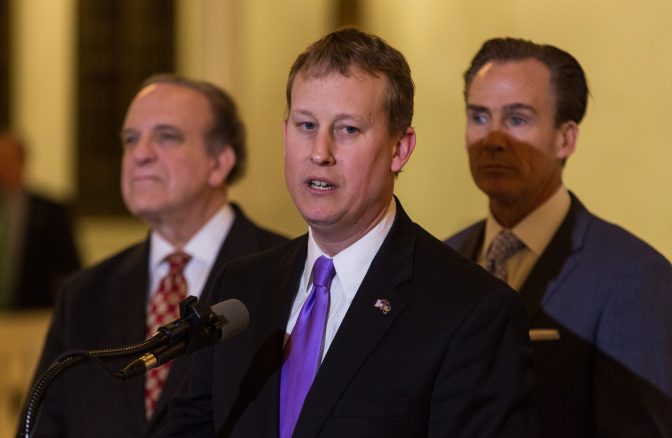 “Our parents want to be involved, they deserve to be notified and anything else is unacceptable,” Martin said.

Wolf’s commission on LGBTQ affairs criticized the law as “a cruel attempt to politicize LGBTQ people and deny their humanity in order to gain cheap political points”.

Opponents attacked the draft law on sexually explicit content in curricula, teaching materials and books as a “book ban” and said it was an attack on LGBTQ people.

Aument insisted the bill was not a book ban, claiming explicit material was in schools across the state.

“The more I speak about this proposal, the more I hear from families providing additional examples,” Aument said during the debate.

Facing criticism that the bill was an attack on LGBTQ people, senators previously amended the bill to remove a reference to a Pennsylvania obscenity law that prohibits the exposure of minors to materials containing “homosexuality.”

Despite this, Democrats attacked the bill as homophobic and transphobic.

“Make no mistake, despite repeated rejection, homophobia and transphobia are at the heart of this legislation, and when that happens there will be a targeted attack on LGBTQ-centric books and an attempt to erase LGBTQ people,” Senator Maria Collett said , D- said Montgomery.